25.05.2020 Nagold/Shanghai. The design community in Shanghai has a new hangout. The first ROLF BENZ flagship store in China has been welcoming visitors to Wending Road 209 since mid-April. The prestigious German design company has positioned itself in the immediate vicinity of other top interior companies as a desirable partner for the premium segment.

Private customers, designers and architects from Shanghai and the surrounding area can explore the full creative and functional spectrum of ROLF BENZ interiors over two levels and 850 m2. The “Made in Germany” concept is highly rated in Shanghai. The first ROLF BENZ mono-brand store opened in the metropolis back in November.

Meeting the demands of the style-conscious Shanghai public, a generous amount of space is dedicated to the latest Lifestyle products in China’s first ROLF BENZ flagship store. Solid wood, natural stone and metallic surfaces unfold their authentic effect in the latest ROLF BENZ world. Reserved shades of grey, black and white are combined with emotive spice colours and elegant metal tones such as ochre beige and marrone to create a sophisticated atmosphere.

With its ROLF BENZ flagship store in Shanghai, the Rolf Benz company has reached another significant milestone on its way to achieving extensive brand presence in China. Even the ROLF BENZ China subsidiary has been incorporated into the building on Wending Road and will hold events at the store.

The first ROLF BENZ mono-brand stores opened in Shanghai, Beijing, Hangzhou and Suzhou in China in 2019. The grand opening of a second Rolf Benz flagship store in Beijing will take place in July 2020.

By the end of the year, in addition to the two ROLF BENZ flagship stores, there will be 10 ROLF BENZ mono-brand stores in China offering fully customisable “made in the Black Forest” living environments. 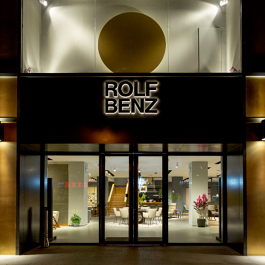 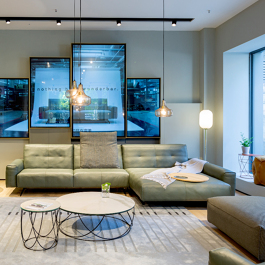 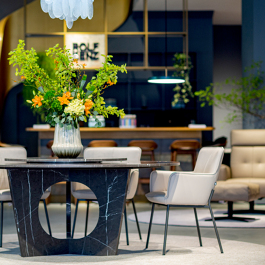