04th April 2017 / Milan / Nagold. The furniture classics of the twentieth century play an important part in the formal inheritance of the top design studios. And now they are being rediscovered by the next generation – and their echoes are reverberating in the timeless furniture of the future.

Take for example the Rolf Benz 650 chair, introduced by Rolf Benz in 2016 at the Salone del Mobile. Now, in line with current expectations of comfort and creativity, this elegant seat is now making an appearance in a version with fixed upholstery which can be designed in a number of different ways.

The basic idea of Rolf Benz 650 is two moulded wood shells, available in oak or walnut, placed one on top of the other. They intertwine like two hands, standing on a choice of either an angular tubular steel base frame or a wooden frame with oval legs.

Even back in 1956, the Slovenian Professor Niko Kralj used two overlapping seats in his ‚Shell Chair‘ (www.rex-kralj.com). Until now Rolf Benz 650 was only available without upholstery or with a loose quilted cushion, but now the design scope has been significantly expanded. The chairs in the new version with fixed upholstery can be covered with all the fabrics and leathers in the Rolf Benz collection – and that applies to the bar stool too.

This diversity shows that Rolf Benz is more than a company that realises the full potential of the technical and stylistic possibilities of the future. The designers of Rolf Benz 650 have created an invisible connection between both the moulded wood shells, and given the chair contemporary proportions that are at the same time timeless. Design: Formstelle in cooperation with Rex Kralj. 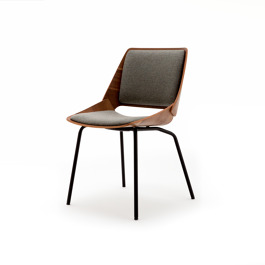 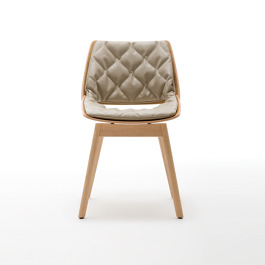 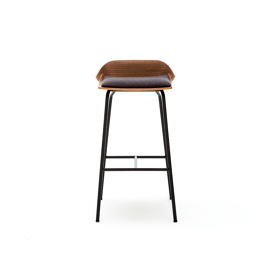